How to Expand RAID Pool on Synology NAS 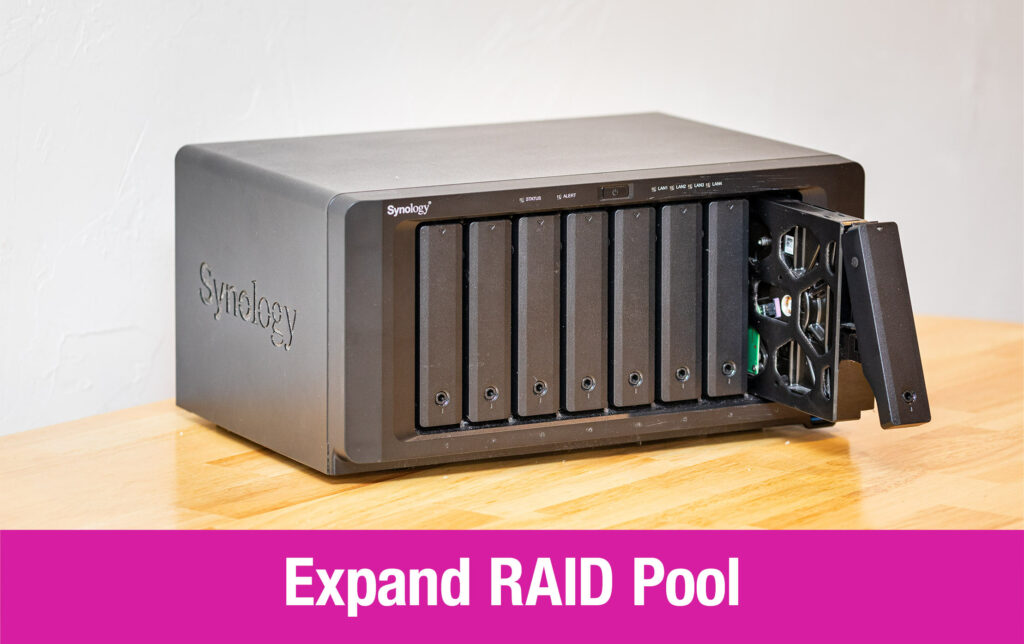 When using a RAID / SHR on Synology NAS, you do not have to fill all of your drive bays at the same time. Instead you can buy something like a DS1819+ and start out with just as many drives as you need. Then once you start running out of storage space, you can simply expand the RAID pool on your Synology NAS by adding additional drives to your RAID pool. In this tutorial we are going to cover how to expand a RAID Pool on Synology NAS by adding an additional drive to it, as well some important things to know before you expand your pool!

Expansion time varies heavily based off of exact use cases, but it can be long. When I performed my RAID expansion on my DS1819+, I started with 5 4TB Iron Wolf drives with the overall storage pool roughly half full. After adding a 6th 4TB drive, I recorded the RAID percent complete at various time steps shown below. The total time taken was 1 day, 3 hours and 23 minutes.

Interestingly, when plotting a best fit line the R^2 value was .997, which means that the percent complete almost perfectly predicted the total time the expansion would take.

Not all RAID volume types support drive expansion, most notably missing is RAID10. The following are the volume types that can be expanded by adding an additional drive:

Expansion bays such as the DX517 should NOT be used to expand a volume. Instead you should create a separate volume on each device. Volumes which span between an expansion unit and a NAS have a single point of failure, which is the cable connecting them. If this cable were to break or become unplugged, the entire volume would crash and likely become unrecoverable.

Whenever expanding a RAID you need to put in a drive which is the same size or larger than the smallest drive in the pool. This can become a headache when using drives from different manufactures, as two “4TB” drives could be slightly different sizes. This is generally a non issue for drives within a manufacturer’s line.

Expanding your volume puts stress on your drives, and you do not want to experience a drive failure in the middle of it. Because of this, you will want to run extended SMART tests on every drive in your pool. This ideally will find any drives with issues which might cause the pool to fail during the expansion. If you find any drives with issues, I would recommend replacing those drives before expanding the pool.

Though expanding a RAID pool on Synology is generally low risk, you should still backup your critical files to an external hard drive before doing anything with your pool.

All modern versions of DSM allow for disks to be inserted in any order to create a volume. However just because you can does not mean you should. I would recommend having all of your drives in a single volume next to each other as it will make locating disks easier later on.

If your Synology supports hot swapping you can simply insert the drive without powering off. However if your NAS does not support hot swapping you will need to shutdown the NAS before inserting a new disk.

Step 4: Expand the Pool from DSM

Once you have inserted a unitized drive, navigate to Storage Manager from within DSM. Open up Storage Pool from the menu on the left hand side, and you should see an Action drop down menu. From this menu you will have the option to either add a drive, which will expand the Pool, or to change Raid type. Select Add drive and your pool will begin.

You are now done! DSM will do everything to expand the RAID pool for you! The screen should look something like this:

The ability to expand the storage pool on your Synology NAS greatly improves your ability to future proof. When I bought my DS1819+, I knew that I would be expanding it down the line so I only partially filled it with drives. Another great feature of adding an additional drive is the performance gain that you get, which becomes especially apparent with sequential reads and writes. The following is my performance over a 10GbE SMB connection with Jumbo Frames Enabled

Overall, expanding my RAID pool to include an additional drive was a remarkably painless process on my Synology NAS. Check out the rest of my gear!

The above contain Amazon affiliate links. No one has paid me to get their products in this tutorial, however if you click the links and purchase an item I get a small commission from Amazon as a referral.